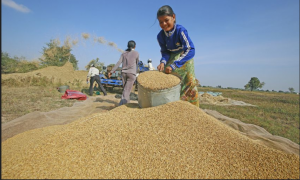 The Agriculture Ministry and the Cambodia Rice Federation (CRF) are at odds over the branding of Cambodia’s premium jasmine rice that would help differentiate it from similar varieties sold by Thailand.

The CRF is working on a new brand name that it hopes will help distinguish Cambodian rice in the international market.

The national rice body wants to bring all varieties of jasmine rice under an umbrella brand name that it plans to announce at the Cambodia Rice Forum in November.

“We have set up the market promotion executive committee for naming the quality rice as the trademark, because so far our rice is just known as fragrant rice, because we do not have a specific name,” the CRF’s acting secretary-general Moul Sarith said.

Sarith said that inconsistent labelling of Cambodian rice among exporters was diminishing the collective strength of the rice sector.

Cambodia’s jasmine rice can be grown from multiple varieties of seeds, including Phka Romdeng, Phka Romeat, and the Kingdom’s distinguished variety, Phka Rumduol – a long-grain, aromatic type of rice and named after Cambodia’s national flower.

But the Ministry of Agriculture has already zeroed in on “Cambodia Jasmine Phka Rumduol” as the sole brand name for Cambodian rice.

“I would like to urge all rice exporters to use this name from now on,” said Hean Vanhorn, deputy director general at the General Department for Agriculture at the ministry.

“I know some rice exporters do not dare to use this name, but we need to change that.”

However, selecting a brand name based only on one variety of fragrant rice would confuse buyers, said Song Saran, CEO of Amru Rice and CRF member.

He added that when buyers would test the rice they would expect it to be Phka Rumduol, but in actuality it could be either of the other varieties used in Cambodian farming.

“We should find another name that can cover all the three kinds of rice seeds” he explained.

“If we use this name, it could be confusing and complicate things with the buyer,” Saran said. “We need to explain the source of the rice to the buyer.”

While he wasn’t averse to the ministry’s support of branding, he said the private sector should be consulted in the process to formulate an exact specification of the kinds of rice that will come under this overarching brand.

The CRF’s Sarith backed the notion that the ministry’s suggestion was too narrow in its representation of all varieties of rice and confirmed the national body would not use “Cambodia Jasmine Phka Rumduol”.

Regardless of the name chosen, a new label was just the beginning, said Commerce Ministry spokesman Ken Ratha.

Unique branding for Cambodian rice will need an effective marketing drive in order to educate international buyers, he said.

“Because so far, the buyer knows it as Cambodia Jasmine rice,” he said.

“If we create a new name, we need to discuss the marketing and advertising strategy in order to avoid confusing the buyer.”
Contact author: Cheng Sokhorng

Rice Federation to encourage the purchase and distribution

Teamwork is the key

Rice Federation to encourage the purchase and distribution

Teamwork is the key